But now we’re back.

The last full-year iteration of English 204, The History and Future of the Book, will take place in the 2020-2021 academic year. So we will resurrect this course blog with new student work. The 2018-2019 edition is also available at another site: https://words.usask.ca/historyofthebook2018/. Feel free to check it out as well.

The last iteration, I wrote. Yes, but this is not the place for my rant about pedagogy being sacrificed to bad software design. Besides, what is more important is that this course is being taught entirely online (“remote delivery” is the term that the University of Saskatchewan is using), as a response to the risks of the current COVID-19 crisis. This will be a time not only to test our adaptability to uncertain and unexpectedly constrained circumstances, but also to ponder both the powers and the limits of our technologies. May we find creative ways to respond to those limits, and to use those powers thoughtfully and well. Read on.

That’s all for now, folks.

This website, the course blog for the 2016-2017 version of the History and Future of the Book at the University of Saskatchewan, is now more or less static. The course is over. However, this site will remain available for your reading enjoyment, so please feel free to browse.

I will be discussing a poetic text by Beth Moore documented as a “tweet.” A tweet is a digital document that can contain a text of at most 140 characters, and optionally images or a video. On October 2 2016, Beth Moore tweeted a poem (Fig. 1.) As far as I know, this tweet is the only document on which this specific text was published. The form of a tweet is a one-dimensional block of pixels displaying a text that can be clicked on and expanded to reveal further information about the tweet such as the date and time that the tweet was published and responses to the tweet. Additionally, tweets are presented in a timeline which is a vertical list of tweets presented to a user of Twitter containing tweets from other Twitter users they follow or that Twitter wants them to see.

One of the major ramifications of the form of a tweet on Moore’s intention for how her text is to be read is that because of the date and time feature of Twitter, users can search for tweets published within a certain time frame (including from when Twitter began to the present) by a specific user, a specific group of users, and/or containing a specific word or phrase. Thus, any twitter user reading Moore’s poem is able to use Twitter’s search features to investigate tweets sent by political and/or religious leaders close to the same time as Moore’s tweet to understand the historical context of Moore’s tweet. Essentially, Twitter has something like a built in history book available to anyone who reads Moore’s tweet. Not only this, but also the responses to Moore’s tweet can lead users to useful information related to the tweet’s meaning and reveal how Moore’s audience received the tweet which provides insight on the meaning and purpose of the text.

END_OF_DOCUMENT_TOKEN_TO_BE_REPLACED

The Intimacy of Junk Mail

We have all gotten junk mail before. Opening up your mailbox, with that glimmer of anticipation for that letter from grandma, the cheque you’ve been waiting for or the unexpected surprise card from uncle Carl. There is the flip side too; That dreaded feeling of, “I hope that bill isn’t in there today.” However, snuck in-between those hated debt letters and small delights are the print ephemera no one asked for and most often don’t want. Colourful little booklets meant to draw you in with words like “SALE” and “90% OFF”. These infiltrators to our personal mailbox often seem annoying and even aggravating. They are planted into OUR mailbox by no doubt a master spy whose only goal is to bother us. 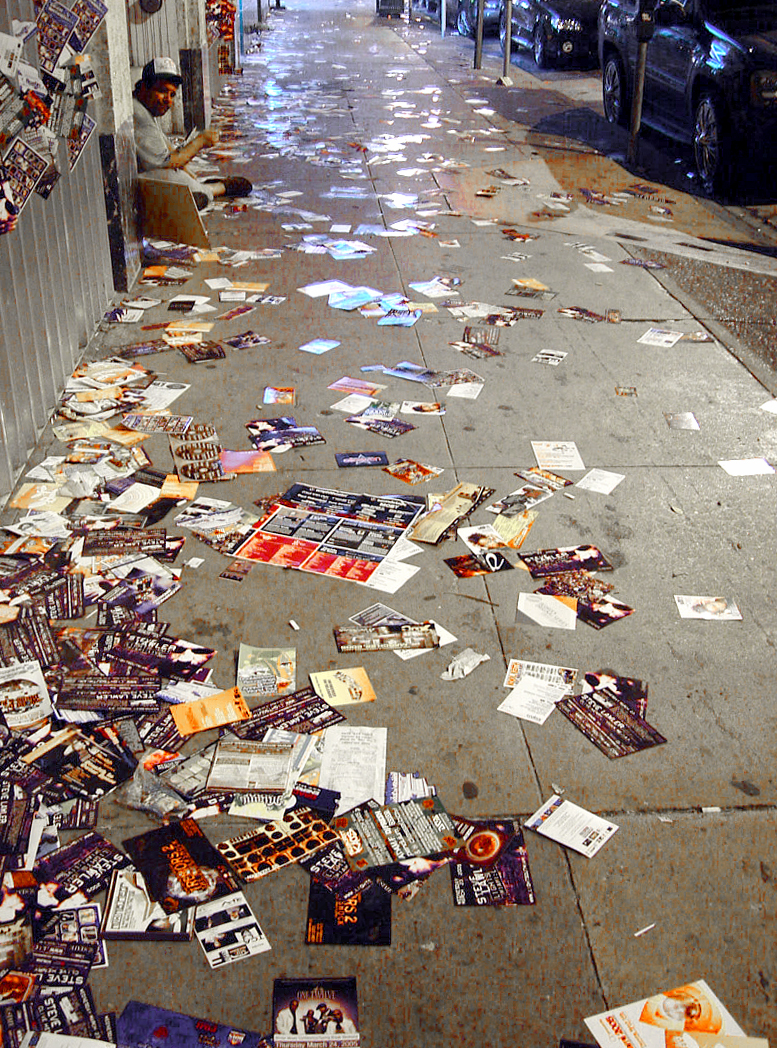 In fact, although many of us today go about our day not noticing the constant bombardment of ads and displays vying for our slightest glance, we often don’t think of the good old flyer as a more personal way to vie for our attention. Ask yourself, what do you think has a more personal quality: the ten second ad that is simply in your way at the beginning of that youtube video your best friend sent you that everyone has seen and you look foolish because you’re always the last one to see these things? Or the flyer that someone took the time to place in your mailbox? The flyer that you read while sitting down at your kitchen table; The same table you spend every holiday sitting at with your closest (and not so close) family, and flip through casually with nothing better to do than to day dream about all the stuff you didn’t know you needed until you discovered it on page 3. Surely in your own home, sitting at your own table, paper in hand is more seductive to our sensibilities than a viral bombardment of subliminal messaging?

END_OF_DOCUMENT_TOKEN_TO_BE_REPLACED

Since their popularity began in the 80’s and 90’s video games have been seen as by many as a waste of time, a corrupting influence to children, and mindless entertainment. There are endless sensational news articles talking about the detrimental effects they have on people and how they are replacing the book in modern society, what is the reason for the popularity of video games? It’s hard to imagine that an industry that’s existed since for over two thousand years could be overthrown in a couple of decades. In this post I will be looking at the things video games do better than books, but I don’t want to give the impression books are inferior to video games; they each have their strengths and weaknesses.

One of the most discussed issues in video games, especially by the news, is morality. Of course when you think of morality in video games it’s easy to immediately think of games like Grand Theft Auto or Halo,which generally focus on the gameplay and not the morality of the player’s actions. For instance in Grand Theft Auto V there is a torture scene the player must go through on another character and there is no option of not doing it, you are expected to not care about the moral implications of it.

However, a game that does consider the player’s actions is The Walking Dead Season One by Telltale games, a game based on a visual novel that was made popular by the TV show. In The Walking Dead you are faced with the moral issues of a zombie apocalypse; while there is of course the blood and gore that is typical of the genre, it also shows the moral side of things as well. In the game you play as Lee and take care of a child named Clementine whose parents were killed in the ensuing apocalypse, and the story makes your moral choices count. Throughout the story you are made to care about her and the other characters, then when you are given choices you must also remember that Clementine is watching you and certain actions you take will affect her. For instance, you could kill a man you think might be about to turn into a zombie, but that would also emotionally scar Clementine and could come up later in the story. Of course there are people who would argue that they aren’t real and so why should you care about them? The same could be said for books; the same empathy that makes a person connect to a character in a book makes a person connect with a character in a video game. Of course both have to be believable and well written, something I will admit video games have trouble with.

END_OF_DOCUMENT_TOKEN_TO_BE_REPLACED

The Merit of Video Game Narratives in Academia

Elyn Achtymichuk’s lectures about the video games inspired a plethora of passionate discussions regarding the nature of video games and whether they should be studied in a university-level English class.  As an avid gamer, I found the lectures and the discussions that emerged intriguing.  I decided to analyze the narrative of Bioshock Infinite through an academic lens, as I believe certain video games possess rich narratives that can be beneficial to academic practice.  In order to properly discuss this topic, I will provide a brief summary of Bioshock Infinite.  Spoiler alerts will appear well in advance of any discussion regarding the ending of the game.  Additionally, I will spend time unpacking the numerous themes found in the game’s narrative and discuss how they might aid students’ comprehension of narratives.

In order to adequately analyze Bioshock Infinite’s narrative, I thought it would be wise to play through the entire game to give myself a refreshed view of the plot.  The game takes place during 1912, and the player takes control of Booker DeWitt.  He was once employed by the Pinkerton National Detective Agency and carries emotional baggage from his service at the Battle of Wounded Knee.  His wife dies in childbirth and he turns to gambling to numb the pain of losing both his wife and his daughter.  With a rapidly accumulating amount of debt, Booker is forced to pay off these debts by travelling to Columbia in search of a young woman named Elizabeth.  However, nothing about this job is conventional, as Columbia is a steam-punk themed metropolis that, through scientific innovation, sits suspended thousands of miles in the sky.  The game’s main antagonist is a man named Zachary Comstock.  He built Columbia on a set of twisted beliefs where former presidents such as George Washington and Thomas Jefferson are revered as deities.  Racial segregation is severe, as African-American, Irish, and Chinese people are viewed as less than human.

Therefore, it is not surprising that a rebellious group known as the ‘Vox Populi’ emerges as a resistance to the white American bias that founded the city.  Upon rescuing Elizabeth, Booker comes to the realization that she is not a normal young woman.  She possesses the power to open and produce ‘tears’, which are ripples in time that lead to different dimensions.  With that in mind, it is clear that Elizabeth’s abilities could be used for malevolent intentions.